When you vote for a Governance referendum, your tokens are locked at least while the referendum is up for vote. Once the referendum ends, the lock may expire or it may remain for a longer period, depending on your conviction and whether you voted with the winning side or not.

But regardless of the lock period, the lock will expire eventually and once that happens you need to manually remove it in order to make the locked balance transferable again. The lock isn't removed automatically. In this article, you'll learn how to remove these expired democracy locks.

If you click on the arrow icon on the far right of your account and then hover over the little clock icon next to the democracy locked balance you can see if there are any locks that have expired: 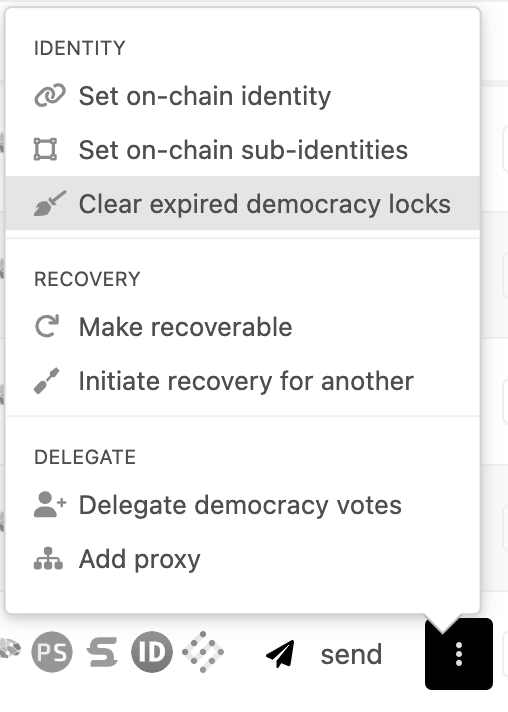 3. Then simply sign and submit the extrinsic and all the expired locks will be removed.

Clearing an expired democracy lock through the UI is a batch call that the Ledger apps do not support. So, the two calls need to be issued separately for Ledger accounts. To do that, follow these steps:

3. On the left drop-down menu select "democracy" and on the right select "removeVote(index)". Then enter the referendum index. In the example screenshot above, the index of each referendum is shown next to the expired locks.

4. Then submit the transaction

If you have more than one expired lock, you need to repeat this process for each one you want to remove.

Send feedback
Sorry we couldn't be helpful. Help us improve this article with your feedback.
Disclaimer: We always strive to provide you with the best support we can and we take all care to ensure that our instructions are accurate and concise. However, following these instructions properly, as well as the general management of your accounts and funds, is ultimately your responsibility. Web3 Foundation cannot be held liable for any accidental loss of funds or any other damage you might incur.