What is the contract address of Polkadot? Print

Polkadot and Kusama are completely separate networks from Ethereum, BSC, Polygon, etc, which is why there are no contract addresses like you may be used to with ERC20 and BSC20 tokens.

Polkadot parachains are designed to be application-specific, as they are custom-built for a specific use case. While many parachains can run smart contracts, the Polkadot relay chain itself does not have them. Instead, the relay chain is a layer-0 protocol that connects these parachains together through shared security.

Therefore DOT and KSM are currently not available on Uniswap, MetaMask, Pancakeswap or other projects of the Ethereum or BSC ecosystems.

There are "wrapped" or "pegged" tokens on both networks for both DOT and KSM, but these are not native tokens. They simply represent DOT or KSM, but they can't be sent to native Polkadot or Kusama accounts. 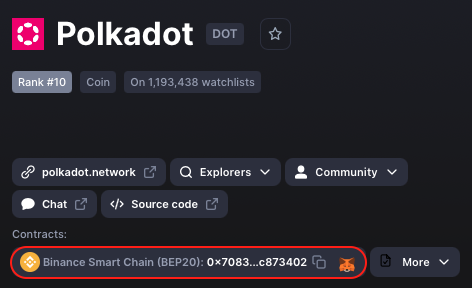 Send feedback
Sorry we couldn't be helpful. Help us improve this article with your feedback.
Disclaimer: We always strive to provide you with the best support we can and we take all care to ensure that our instructions are accurate and concise. However, following these instructions properly, as well as the general management of your accounts and funds, is ultimately your responsibility. Web3 Foundation cannot be held liable for any accidental loss of funds or any other damage you might incur.